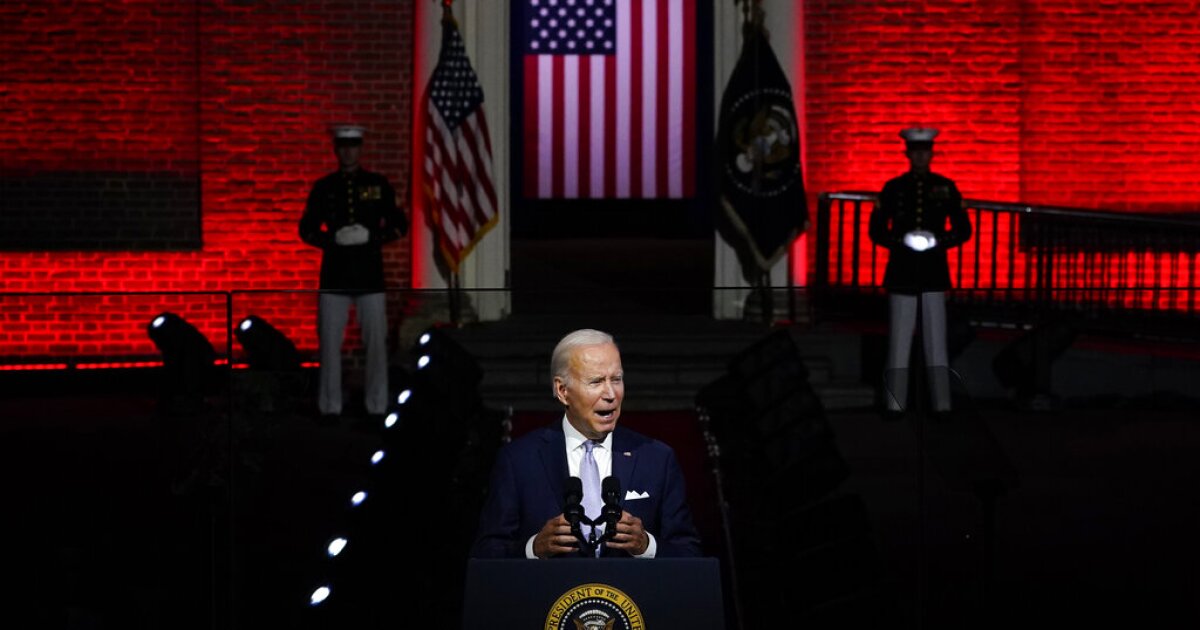 This is my Twitter Rant inspired by Biden's Dark Brandon speech vilifying those who dissent, where I discuss the next steps ahead for humanity to create a Golden Age.

Spirit moves me to speak across many different platforms and formats. One of them is Twitter, where the war of the worlds is ongoing.

Last night our president, the Usurper in Chief Joe Biden (our elections have been rigged for a LONG time), gave a speech in Philadelphia that branded Trump supporters as threats to our democracy.

Setting aside the motivations and languaging for a moment, I took the opportunity today to view it from the lens of those who are awakening and trying to build a new world free of all the bullshit.

For those who don’t follow me there (I recommend it), here’s the thread from my rant:

“The Dark Brandon speech clarified the battle lines. Liberal totalitarianism hiding in woke sheep’s clothing vs ultra-MAGA forces that refuse to kowtow to their corruption and power games, heading for a collision and war for all the marbles.

“Is this unfolding American Armageddon the last gasp of 3D, or an anchor to drag us deeper into its clutches? That will be decided by the consciousness of followers of both sides, and whether they choose to fight or seek another solution to their polarity wars.

“Will the raw power of the state suffice to quelch the growing demand for open, just and responsible government that serves the people rather than the elites who foment division and conflict? Or will it trigger greater dissent and cause people to turn away toward gender pastures?

“Democracies and dictatorships alike, governments all over the world have gotten out of hand, not just America. They are failing, so they grip tighter to the reigns of power to preserve their privileges and impose their wills to get more of its spoils.

“The promise of ascension to a 5D world is for less govt and less power in the hands of a few, where people take responsibility for their own affairs and wield it consciously, with love and light and spirit guiding the way.

“But is humanity ready to take the next step toward creating heaven on earth and ushering in a Golden Age? Hard to tell, for our minds are so poisoned by narratives that tweak fears and drive us farther apart. This undue influence predisposes us to more of the same.

“Yet beneath the surface of the collective consciousness bubbles an innate desire to be more and to restructure our affairs in new ways so people can go their own ways without interference or doing harm to others in the process. This consciousness will grow and cannot be supposed.

“The genie within us has awakened, and it seeks expression in our reality – an expression of free will to go where our leaders don’t want to take us. Many are growing aware of its force within them and want to turn away from the power games that keep bringing us more of the same.

“To those who are awakening to the urges of spirit to evolve themselves and their world to better reflect the light that shines within, I say to stand. Create a space from the madness, and strengthen your vision for a better tomorrow. Then work to make it real.

“To those who succumb to their polarity ready to fight against their opposites and efforts to wield power against them, I bless you and pray you will awaken to the darkness within you that threatens the future of us all. Embrace the light and allow it to lead you home.

“Humanity is at a crossroads, and America too must choose. Who are we and what are we about? Where are we really trying to go? How will we get there if we keep doing things the same old way, where might makes right and those without power demonized for wanting something different?

“That choice starts in you. Where are you going? Do you expect to get there by imposing your will on others who don’t share your vision, or fighting them to protect your own? Will greater conflict really create a future of peace?

“Whether you’re woke, MAGA, or anything else, use the consciousness you have. Don’t sacrifice it to those who want to fight or push you to participate in their power games. 3D is ending. Isn’t it time you get on board the 5D train?

“Godspeed on your journey to the light. God bless you indeed.”